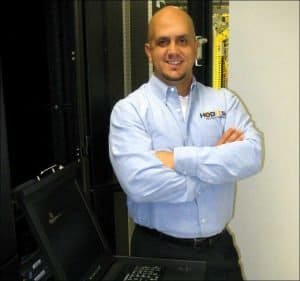 Maintaining complex computer networks always was easier for large businesses. Hector Graxirena saw this in his work for Publix Federal Credit Union as the Information Security Officer, and as the Global Network Engineer for Jabil Circuits, Corp.

He knew that often it took a well-staffed information technology department to stay apace of the upgrades and daily safeguarding needed to keep systems running efficiently– a large cost but not prohibitive for a company large enough. But they saw that smaller businesses often needed the same kind of systems without the financial means to hire IT departments; as a result, often they just let this maintenance lapse.

“When a person buys a car, they have to do things like oil changes,” he says. “They can run their car even if they don’t do these services, but in the long run it will fall apart.”

HoBITS is like a mechanic for small businesses, protecting their systems from spyware, spam and data loss daily. The business is the de facto IT department for its clients, offering a plan to take control of all software protection and updating.

“For a small-business owner without a lot of resources, computer problems are the last thing they want to worry about,” Graxirena says. “The good news is with a few simple precautions it keeps a stable environment and they don’t have to worry about it.”

Before the firm works with a potential client, HoBITS studies the company to make sure it is a good fit. It asks two questions: 1) Is technology more important to you than it was five years ago? 2) Will it be more important in five years than it is now? If the answer is yes, the company would benefit from HoBITS Technologies, Mr. Graxirena says.

HoBITS Technologies has more than 60 clients, including law firms, doctors’ offices, financial services companies, and manufacturers. Its plans range from $25 per computer for a basic level of maintenance to others that cost $1,200 a month or more.

Some companies even have plans that cost $4,000 to $6,000 a month, but Mr. Graxirena notes that is still cheaper than hiring an IT staff. All plans are tailored to exactly what a company needs, he says, with no “one size fits all” pricing.

Its AlertIT™ plan, which gives total control of the network to HoBITS Technologies, has been a success, Graxirena says. The firm’s marketing and outreach efforts also are paying off. Graxirena says he has encountered many small businesses that try to designate the person with the most computer experience to serve as IT director, but often this fails.

“That never works out, because a makeshift IT person usually has another full-time responsibility and not enough skills to support a whole network,” he says. “Over time that network becomes ill-maintained and unstable.”

“People are nervous when it comes to their computer networks,” he says. “We take that fear away, we make IT happen!”

WE CAN WORK WITH MOST BUDGETS
(AVERAGE WEBSITE JUST $1,495)